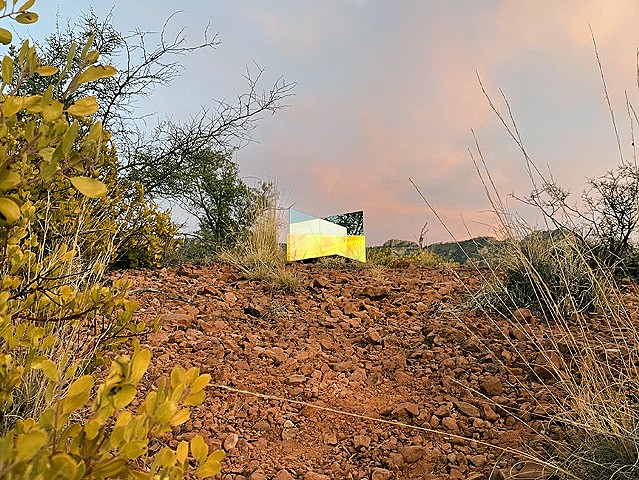 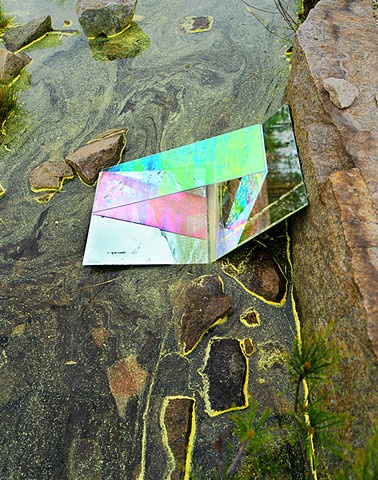 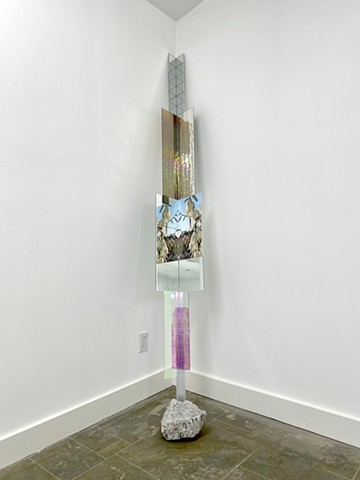 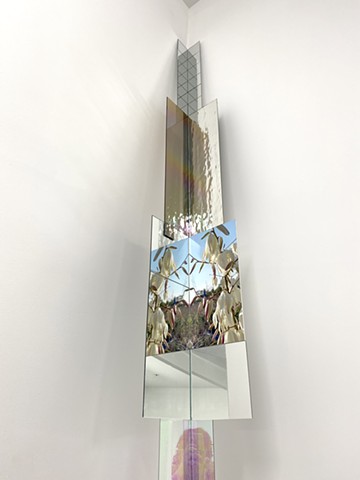 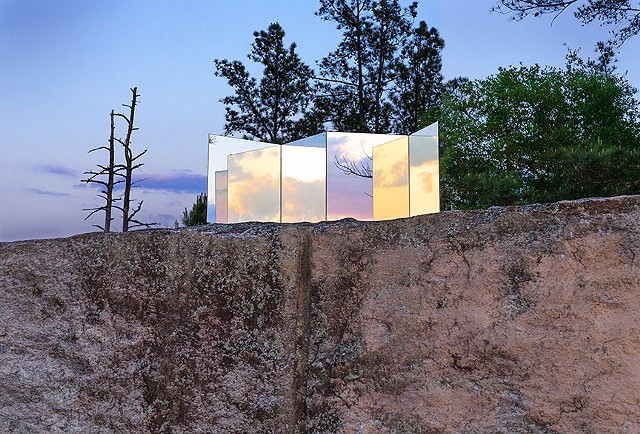 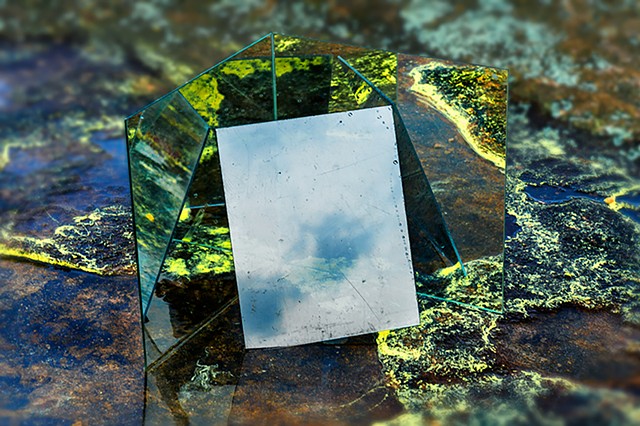 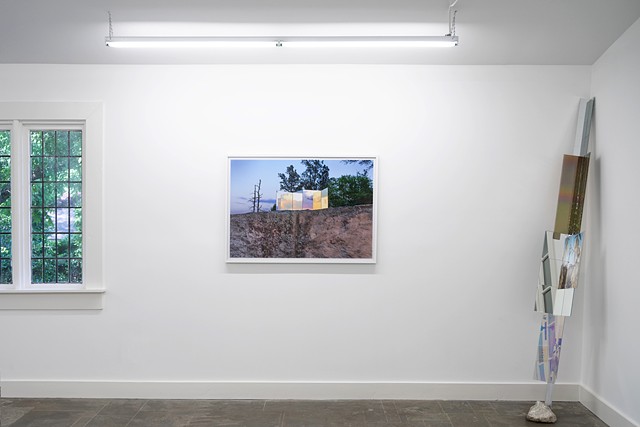 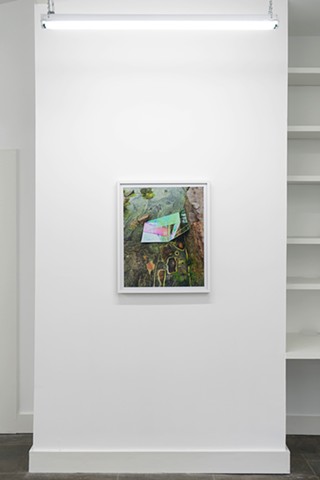 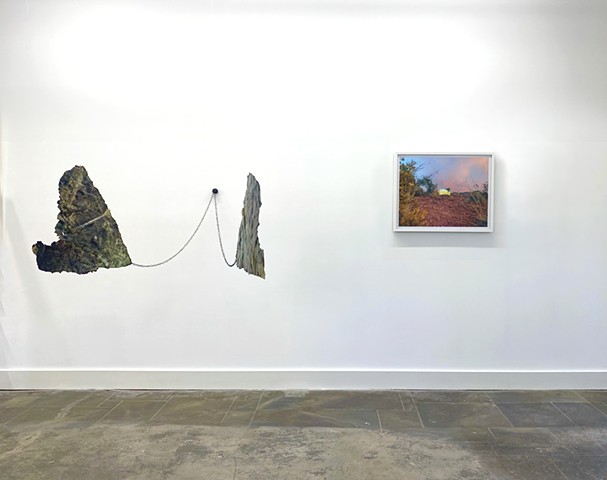 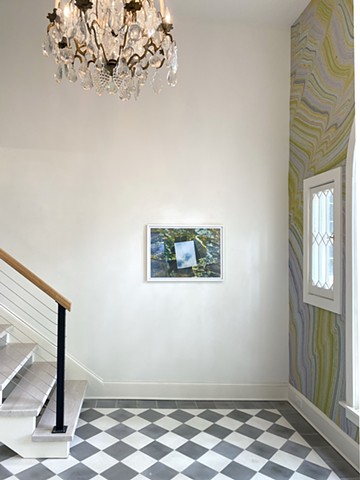 Via photo, video, and sculpture, MaDora Frey and Vanessa Thill explore themes of confinement of the body in quarantine and expose the layers of emotional and aesthetic resonance in our relationships to place. Frey and Thill were both influenced by Lucy Lippard’s book Undermining: A Wild Ride Through Land Use, Politics, and Art in the Changing West, which presents a collage of concerns about the ways humans intersect with nature. The artists were compelled by Lippard’s analysis of social systems through the lens of gravel, pits, and rock materials. She writes, “A gravel pit offers an entrance to the strata of place, suggesting some fissures in the capitalist narrative into which art can flow.”

Bedrock can be a strong foundation or a blockage of water flow and drainage. The exhibition title, Bed Rock, is meant to evoke some of these contradictions: ideas of excavation or revelation, a foundational core, discomfort at physical constriction or mental despair as in “rock bottom,” the domestic site of the bed, and the erotics of sublime nature. Both artists fixate on the symbol of the quarry, a place that epitomizes the extractive dynamics that have come to define our contemporary world.

Frey grew up on an abandoned quarry lake. As a girl, she ran through the overgrown rocky terrain not knowing that men had shaped this landscape too. It was only later that she learned its former use, and found a powerful attraction to the compromised yet awe-inspiring landscape. In response to the beauty and inherent destruction belonging to these natural wounds, she adopted devotional practices such as moving and arranging large quantities of rocks into patterns using her own body. In the works on view, Frey pairs human-made materials such as dichroic glass and reflective surfaces with available rubble, combining ingredients that are the detritus of the quarrying industry and millions of years of erosion with manufactured materials in impermanent arrangements. A photograph is all that remains of these transitory marks in spaces defined by the immensity of geologic time. Frey’s method of tapping into the sublime reminds us of our place in relation to the billions of years since the planet began, and consequently the forces greater than us.

Thill became interested in the phrase “angelic quarry” as it has appeared in Jewish mystical writings, referring to the source of life, endlessly springing from rock. To get closer to the divine, the Kabbalah tradition instructs to “cleave” to it, which means both to split and to join. While an angelic quarry is never-ending, human endeavors come up short, eventually exhausting mineable materials. The quarry becomes a site of quiet conflict, where an experience of nature is openly contaminated by the motives of racial-capitalism that repurpose so much of the world, and people in it, as raw material. To create the works on view, she uses a method of intentional contamination, submerging paper in a bath of natural pigments, metallic powders, salt, and sand, as well as spices, glue, soaps, and other household chemicals and foodstuffs. After the pooled liquids evaporate and crystallize onto the paper, Thill applies a resin coat, creating a kind of earthly dermis. The index of Thill’s body appears in her work Petro-Queen III, a hanging sculpture of crusted salts that renders her open legs and the void in between them as equally solid, equally riddled with holes.

The scale of the landscape dwarfs our delusions of grandeur, yet also reveals itself to be desperately fragile. By juxtaposing Thill’s and Frey’s work, we find a harmonious paradox between the problematic political implications of human interaction with the natural world and the sublime celebration of our transcendent experience with the same. As we consider these disparate yet connected works, we must ask ourselves: Who has claim to nature and an experience of transcendence through it?

MaDora Frey employs a diverse artistic practice to explore her romantic regard for both the natural and built environment and her search for the sublime. Frey’s work takes the form of temporary installations created outdoors, of which only a photograph remains, large-scale public works, and studio works. She is currently serving a residency in the Atlanta Contemporary’s Studio Artist Program. Her notable commissions include large-scale outdoor public works created for the Katonah Museum of Art, Dashboard US at Woodruff Park, and Perennial Projects. Frey’s recent exhibitions include solo and two-person shows at Massey Klein Gallery, NY and Georgia State University Welch Gallery. She received her MFA in painting, magna cum laude, from the New York Academy of Art and her BFA, with a concentration in drawing and printmaking, from Auburn University. Additionally, Frey studied at the Florence Academy, Florence, Italy. Her work is held in numerous private collections.

Vanessa Thill is an artist based in Brooklyn, NY. Her practice explores the ways that non-human systems animate our material surroundings, implicating us all as perpetual collaborators. She has exhibited her work in solo exhibitions in New York at Deli Gallery, Larrie NYC, Bible, and Hood Gallery. She has participated in group shows in the US and Europe, including at JTT (New York), Bard College, Hessel Museum of Art (Annandale-on-Hudson, NY), No Place Gallery (Columbus, OH), Icebox Project Space (Philadelphia, PA), Altefabrik (Switzerland), and Golestani Gallery (Düsseldorf), among others. She writes for such publications as Bomb, Cultured, Artforum, and The Art Newspaper. Her first book of poetry was published in 2020 by Pacific Press.